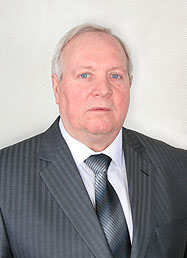 During the period from 1965 to 1966 he worked as a rigger-deliveryman at the mine «Kapitalnaia» in Makeevka city. In 1966–1969 he served as a miner (petty officer second stage) on the holding the Order of Red Banner Baltic Fleet in Liepaja (Latvia).

In 1974 (1969–1974) Bratchun V.I. graduated from Makeevka Institute of Civil Engineering in specialty «Production of Building Products and Structures» with honors and obtained the qualification of civil engineer-technologist.

In 1976–1979 Bratchun V.I. was a full-time post-graduate student of Road Building Materials Department in Kharkov Institute of Automobile Roads.

From 1974 up to present time he worked as assistant, Senior Lecturer, Associate Professor, Professor of Highways and Air Fields Department. In 1980 Bratchun V.I. defended a thesis on subject «Research of tar polymeric binders based on polyvinyl chloride production» in specialty 05.23.05 – Building Materials and Products.

From 1991 he was a Head of Building Materials and Production of Building Structures Department in Makeevka Institute of Civil Engineering.

In 1993 Bratchun V.I. defended a doctoral thesis on subject «Modified tars and tar-concretes of high durability» in specialty 05.23.05 – Building Materials and Products. In 1993 he was awarded by academic title – professor.

From 1998 Bratchun V.I. was a vice-rector for academic affairs, from 2012 – the Head of the Highways and Air Fields Department (DonNACEA).

Bratchun V.I. is the author of more than 450 published, including thirteen manuals and textbooks and seven monographs, 30 certificates of authorship and authoring patents, 10 normative documents. Scientific interests: physical and chemical mechanics of technological and durable road concretes for construction of structural layers of nonrigid road pavement based on the modification of organic binders and advanced modification of concrete microstructure; development of effective technologies for processing industry-related materials in the components of composite materials.

Under the supervision of professor Bratchun V.I. eighteen theses and two doctoral thesis were defended.

Bratchun V.I. is the Deputy Chairman of the Scientific Specialized Board Д 12.08501 in DonNACEA. Executive editor of the Bulletin of DonNACEA « Modern building materials» and «Economics of Civil Engineering and Municipal Economy».